So as my blog tour for “Summer Lover: concludes, I was happy to see that it inlcuded a five star review! Needless to say I was pleased as punch! CLICK HERE to see the original post as well as the give away and more information as well! Happy reading! 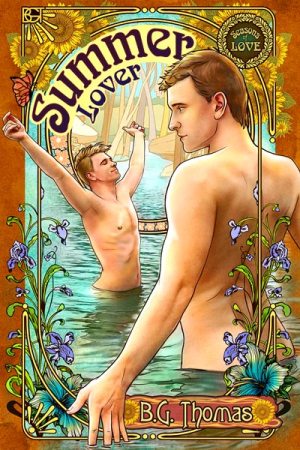 Blurb: Scott Aberdeen doesn’t believe in Santa Claus, the Easter Bunny, or God. Or love—at least, he knows no one will ever love him. After all, he has carried a torch for his best friend Sloan for a decade, hoping his feelings will be returned one day. But when Sloan finds springtime love with another man, Scott’s fantasies are crushed and his scepticism confirmed.

Cedar Carrington, raised by rock star parents, leads a free-spirited, nomadic life, never staying in one place for long. Due to a dark past, he refuses to share or even think about, he is willing to let men into his bed for sex, but never for the night.

When Scott finds himself camping in the middle of nowhere with over a hundred men who all believe in love—and faeries and a magickal gay brotherhood—he’s pretty sure he’s in the wrong place. And when Cedar connects with cynical, critical Scott, he wonders how he could be falling in for this man of all men. But hearts and lives have been transformed at the Heartland Men’s Festival before, and it might be just the place where two very different men can release their pain and find true love at last.

Review: This is book two in the Seasons of Love Series, but it stands alone just fine. I do suggest you read the other one since it’s fabulous, but you can read this one first and still love it.

Scott works in a law firm and likes his job, but lately his work has been suffering due to the realization he will never have the love of his life since his best friend and crush of 10 years has met and truly fell in love. Scott is a cynical, sceptical man. He doesn’t believe in Santa the tooth fairy magic has his doubts about love and definitely doesn’t believe in God or any Gods for that matter. Scott is a practical man if you can’t see it, touch it, taste it, it’s not true.

Wyatt, one of his close friends has been inviting him to the gay man’s festival but since in Scott’s opinion it’s a bunch of ‘Witchy woo-woo ‘he has no intention of going…ever. But when Peni invites him he thinks it’s more than just a trip to a queer man’s festival as he usually jumps to these conclusions with men, longing so deeply to be loved, and his boss pretty much insists he take 10 days off and comeback in a better spirit. So, he takes the leap. Then things unfold and he finds himself there alone, with just his friend Wyatt and hundreds of free-spirited gay men. Is it his bad luck or is it really a higher power at work?

Cedar, better known at the gay man’s festival as the Jockster is a free-spirited gypsy. Most men want him because of either his looks or the fact that he is the son of two famous rock stars but that’s fine with home, since he has no idea of falling in love or even spending a night in a man’s bed…ever. When he meets Scott, he finds that for some reason he is drawn to the man but why? Scott isn’t a believer in anything, he is cynical, has no self-worth and not near Cedars type if he had one.

This is yet another fabulous read from BG Thomas! I am totally smitten! Watching Scott grow and come out of himself at the Gay men’s retreat is like watching a beautiful butterfly morph from its cocoon! The retreat itself is a real hoot! I laughed more than I have laughed in ages! I think this story is a bit less sad than Spring Lover’s was though it does have its moments that you will need a tissue or two. Everything about this book is fun and fantastic. It’s truly magickal. During the retreat, there are lots of yummy sounding vegan dishes and at salon, there are fun sounding cocktails. What a treat that at the end there are some of the cocktail and dish recipes listed!! A real foodies dream!!

I highly recommend this to everyone, but especially to those of you that love a good story about finding oneself, sexy stories with a good story to them, broken men, and magick! If you like camping, retreats, cocktails, vegan dishes, recipes, faeries and fairies…( I couldn’t resist) some fun drag shows, cool songs, rituals, close friendships, and hot sensual mansex this is definitely for you.