How exciting! I love these crowds! Makes me feel so good. It looks like Kansas City is going to have a Gay Pride this year but not until like August and there’s very little information on it. But if it is anything I will be so happy! I love Pride for so many reasons, many of which are listed in this article! 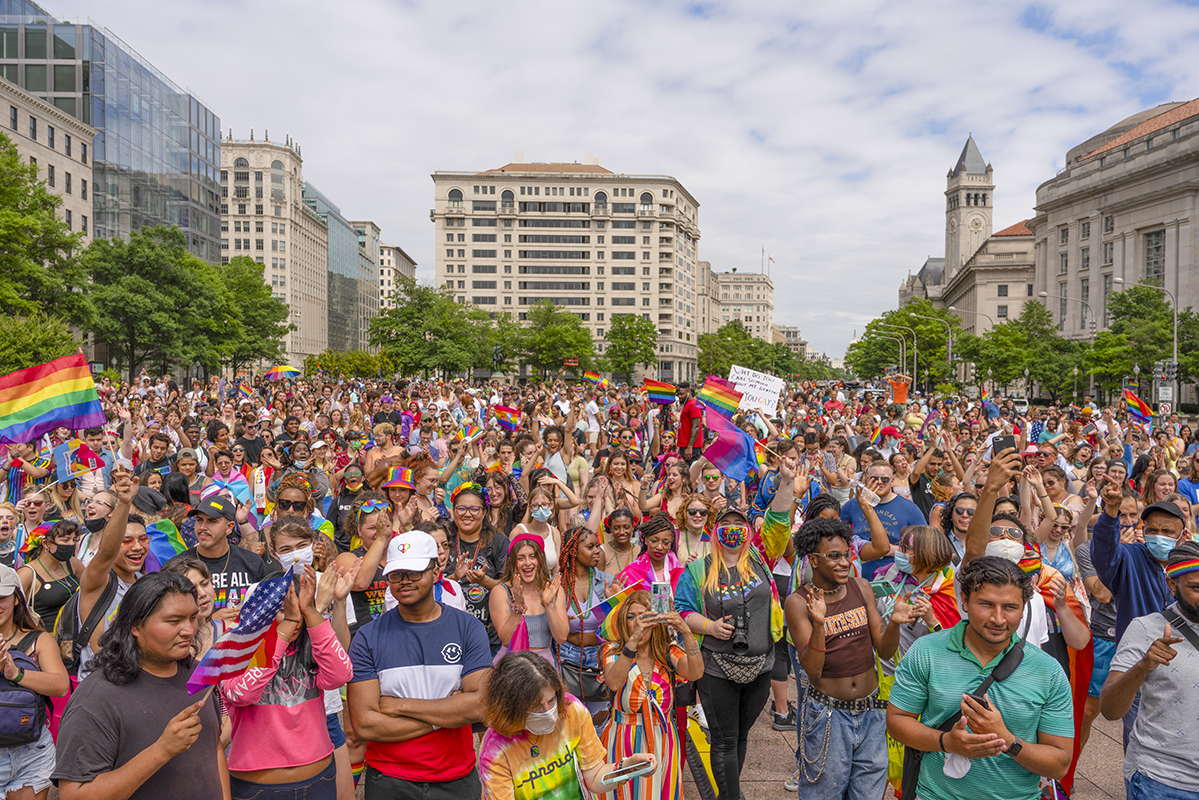 On Saturday, June, 12, thousands of residents and visitors packed the streets of Washington, D.C. to celebrate Capital Pride, which for many marked the first time they had been in a public setting with a large amount of people since the start of the COVID-19 pandemic last year.

Although plans for Pride-themed celebrations had been put in place for months ahead of the weekend, many had assumed that pandemic restrictions would lead to most of the events being virtual or socially distanced. But last month, after the D.C. Department of Health announced that vaccinated people could gather in closer quarters without masking, the city began relaxing some of its restrictions on social distancing, accelerating the reopening of the city’s bars and restaurants and reaching full capacity on June 11.

Capital Pride was faced with a dilemma: Insufficient time to plan or carry out a full-capacity Pride parade and festival, but the ability to do something with larger crowds. They ultimately settled on a walk from Dupont Circle to Freedom Plaza, where they held a rally to celebrate Pride, local organizations and establishments, and the various communities within the LGBTQ spectrum. Following the rally, organizers representing local nonprofits or businesses, each represented by a decorated vehicle embarked on a several-mile-long “Pridemobile parade.” 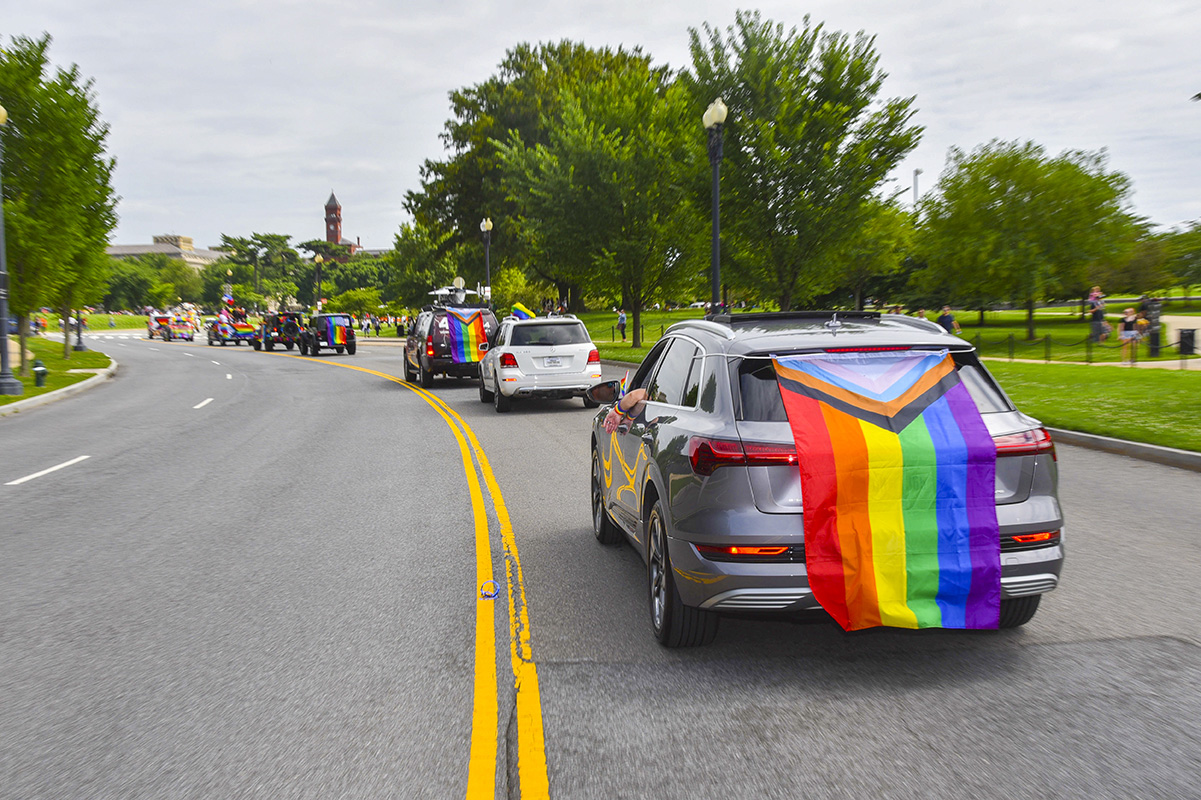 As thousands walked from Dupont Circle to Freedom Plaza, some encountered Vice President Kamala Harris and her husband, Doug Emhoff, who made an impromptu appearance — and history in the process, as Harris became the first sitting VP to march in a Pride event. Ryan Bos, the executive director of the Capital Pride Alliance, said that organizers were taken by surprise at the vice president’s participation, but welcomed it.

At one point, Harris stopped to address the crowd, once again expressing the Biden-Harris administration’s support for greater LGBTQ nondiscrimination protections, which could be achieved by passing the Equality Act, a comprehensive piece of legislation that would write LGBTQ protections into federal law.

“There’s so much more to do,” Harris said. “We celebrate all of the accomplishments — finally marriage is the law of the land. Now we need to pass the Equality Act, we need to make sure that our transgender community and our youth are all protected.

“We need, still, protections around employment and housing. There is so much more work to do and I know we are committed and we understand the importance of this movement and our roles of leadership in this ongoing movement.” 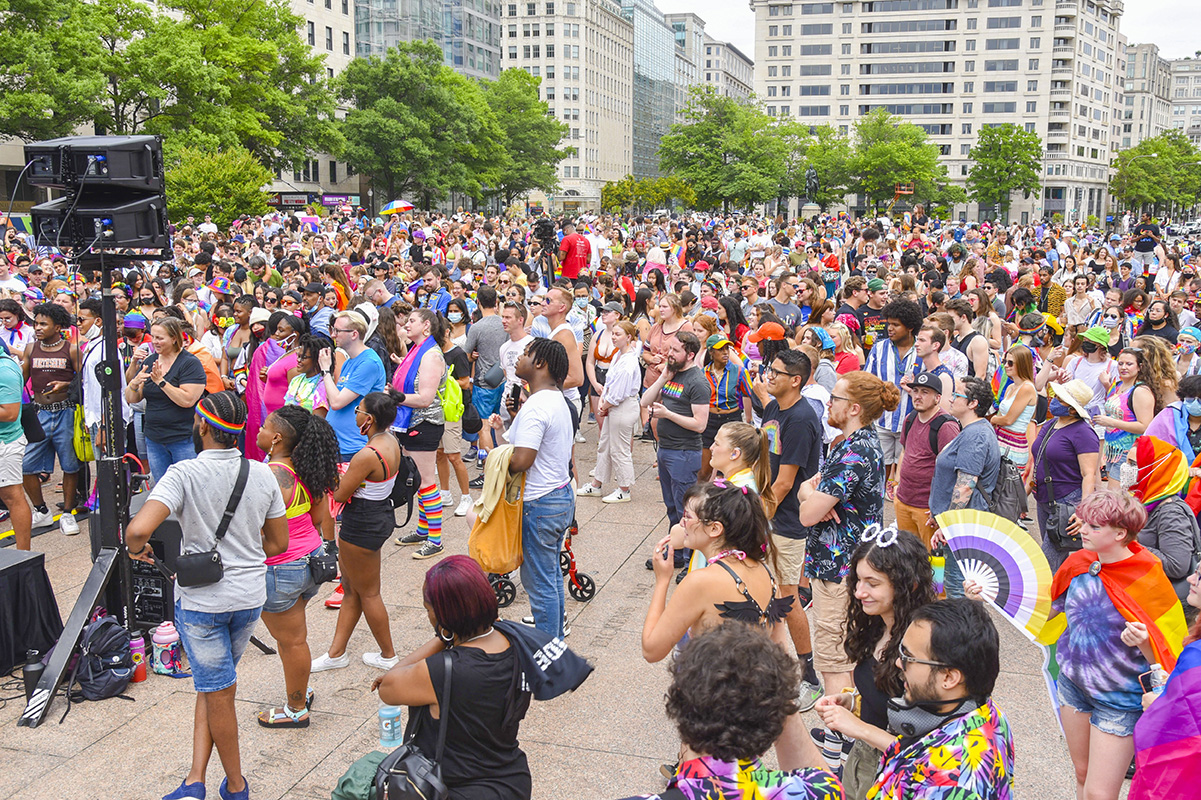 Many participants said they enjoyed the more informal feeling and spirit of togetherness they felt during the walk, as compared to an official Pride parade.

“I liked coming out today because it has a good balance between spur-of-the-moment and Pride with a purpose,” said Randy Snight, 32, of Washington, D.C. “It seemed under-planned, which is what I think most of the original Pride demonstrations were. It doesn’t feel like it’s plastered in corporate sponsorships and there’s a lot of people working to make the event run smoothly. I’m sure they’re here, but it feels more like we’re just a group of people walking down the street. And there’s something really nice and relaxing about that.”

Snight said the larger-than-expected turnout for the march and rally demonstrates that there is a very human desire, as well as a demand, for interaction and community building after a year being socially distanced or in siloes due to the pandemic.

“People are figuring out what they’re comfortable doing again,” he said. “Walking on the street is what a lot of people are comfortable with, we’re all coming together and you’re bringing what you want to it. It’s been really cool to see so many different cross-sections and cross-communities. It’s not jus
t ‘Here’s the bar-sponsored float with the muscle guys on it, and over there’s the dykes on the bikes.’ This feels more like everyone is just here collectively.”

Emily Karp, of Potomac, Maryland, said that even though being back among large crowds felt like a significant change, she did not find herself actively thinking about the need to socially distance or back away from others as she might have when the pandemic was at full force.

“I felt it was safe enough for me to come out in a large crowd and to see people in person,” said the 31-year-old. “I got to see some of my friends for the first time in a long time, and I got to enjoy the vibe with all the pride and joy and rainbows and stuff.”

Kaleidoscope Onyx said he believes Capital Pride can adopt some aspects of the 2021 walk and rally and incorporate them into future Pride celebrations.

“It doesn’t necessarily have to be as corporate as it’s been in the past,” he said. “Honestly, it kind of seems like this has fostered a lot more community than just a bunch of companies rolling around, throwing out stuff to the crowd.”

Onyx said that despite some apprehension about being back among larger crowds, he was eager to attend this year’s Pride festivities, even if they were scaled back. “I know we didn’t have anything last year, but I wanted to make sure I found something to participate in this year,” said the 31-year-old, who lives in D.C. “So I went on Capital Pride’s website and found the information I needed, grabbed a bunch of friends, and told them, ‘Hey, we’re going.’”

For Nathan, a 28-year-old D.C. resident, Pride marked their first large group event they’d been to since the pandemic forced people into their homes, although they’d previously attended smaller get-togethers.

“I love Pride,” they said. “It’s one of my favorite events, just being around so many people who are just so happy with who they are and where they’re at. And so I wanted to come out and see that. I missed it last year.”

Nathan also attributed the ability to reconnect with old friends and make new acquaintances to the more informal nature of the walk, in contrast with the parade and festival.

“In previous years, there weren’t just corporations in the Pride parade, but it felt they were featured more heavily and more prominently than the groups representing actual identities. It felt the parade was just about rainbow capitalism, about promoting brands more than the individuals who were coming out and trying to celebrate their identities, which is what Pride is about.

“Part of what was really lovely about [the walk] being unstructured this year was people walked what they wanted to walk, and found each other. I found a lot of different people who were aromantic in the crowd, just walking around handing out stickers. It’s something where people feel like, ‘I wasn’t expecting to find someone else here who shares my identity!’ And if we had been regimented and stuck in a strict order and if there had been floats separating us, we wouldn’t have found each other.”

Capital Pride’s organizers were pleased with the high rate of participation and felt the weekend turned out well.

“I think we were able to provide enough activities for folks to come together as a community,” said Bos. “Looking at the Pride Walk and the rally, it was something where there literally was just a little over a week’s notice for the community to come together. So to see the outpouring of folks who participated, it’s clear that there’s a desire and a need for community events that bring people together.”

Looking toward the future, Bos says the Capital Pride Alliance will continue some of its pandemic-era programming, such as its Pride in the City video series, the Pride Talks series, where issues affecting various subsets of the LGBTQ community are discussed, and the #StillWe Lead professional development series, although they will likely incorporate both in-person and virtual components.

“We are still committed to trying to find ways throughout the year to continue to come together as a community, and as we continue to reopen, to ensure that we as a community are supportive of each other. So there will be more events to come, throughout the summer as well as this October,” he said, referring to Capital Pride Alliance’s plans to host The Colorful Fest that month.

Despite this year’s Pride celebration being atypical, Bos said there was an overwhelming feeling that people were ready to come back out and reconnect with the larger community, something that potentially augurs well for the rest of Capital Pride’s scheduled events for the remainder of the year.

“Whether they came out on Friday night to the Capital Pride Honors or opening party, or whether they walked with other community members on Saturday or showed up at the rally to celebrate and to listen and hear the work within the community, this was the largest gathering that everyone has been a part of in over a year,” Bos said. “You could see the sigh of relief in many people’s eyes and expressions. And it was very rewarding and fulfilling just to feel the energy, and to hear the conversations and stories from those who were there.” 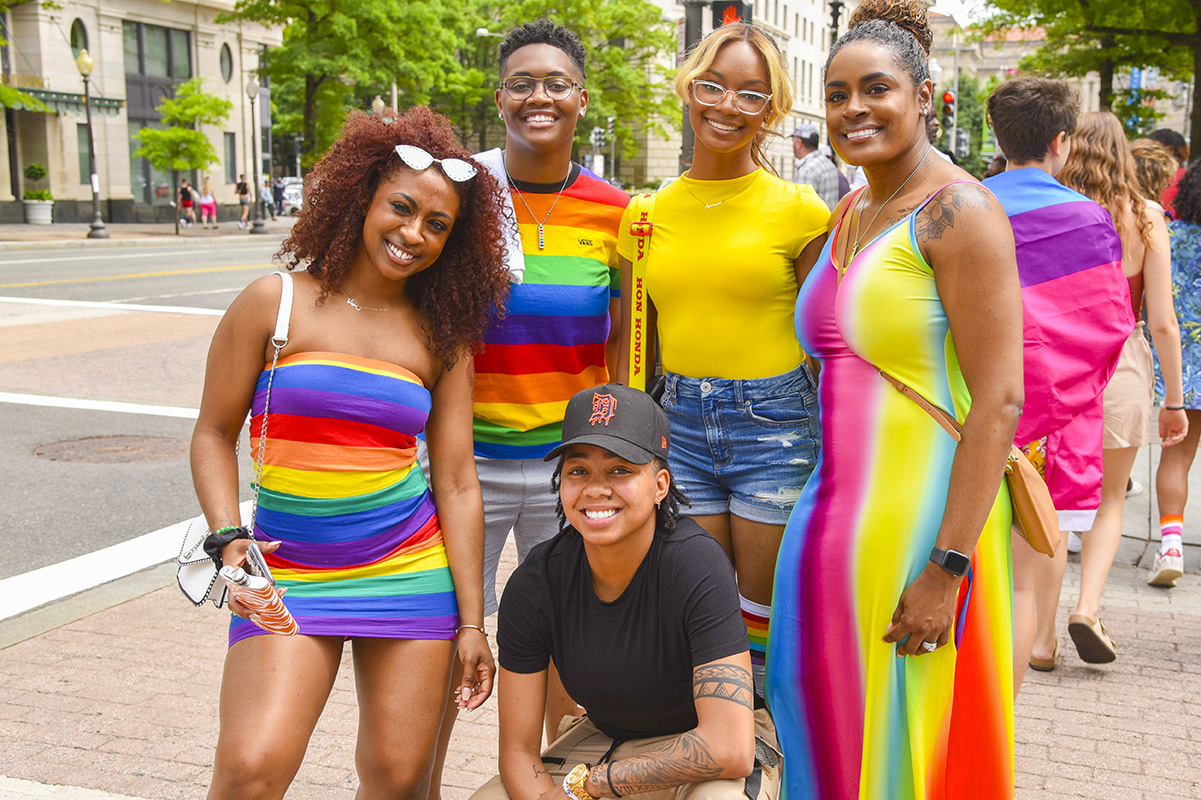 These photographs are by: Tom Donohue and Ted Eytan
Event date: Saturday, June 12, 2021 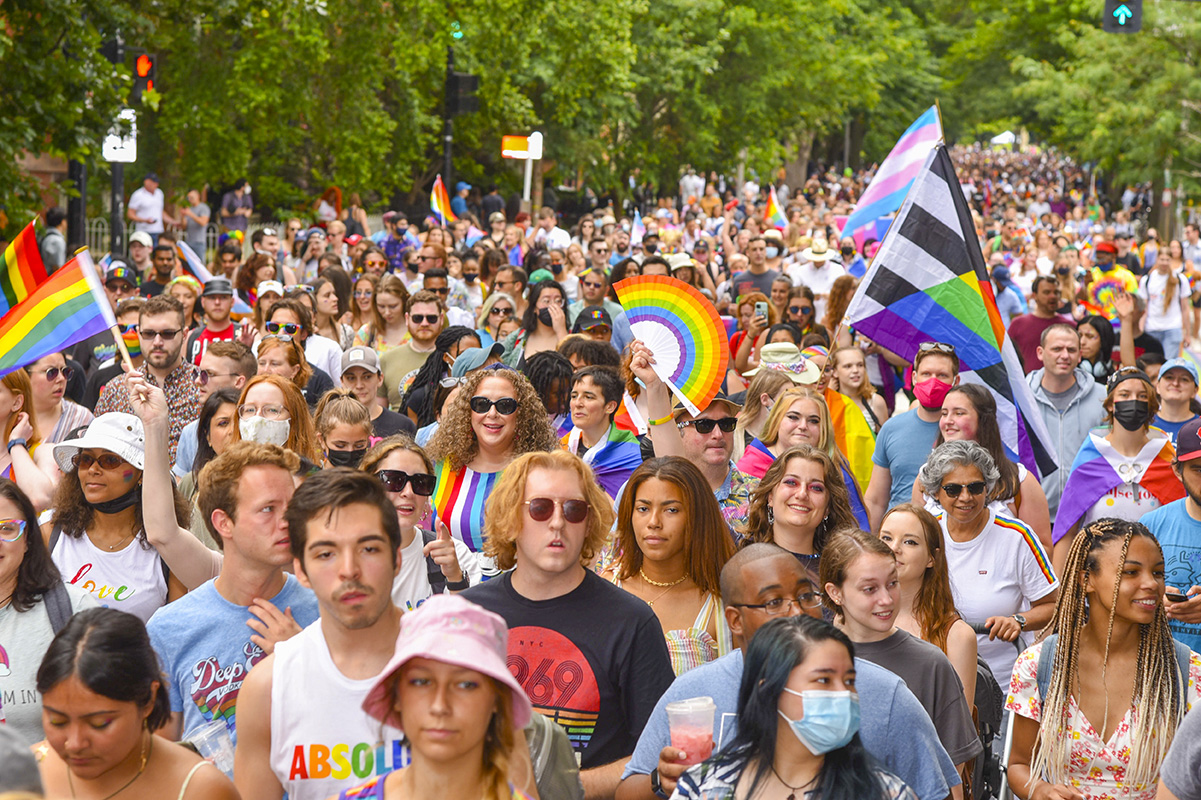 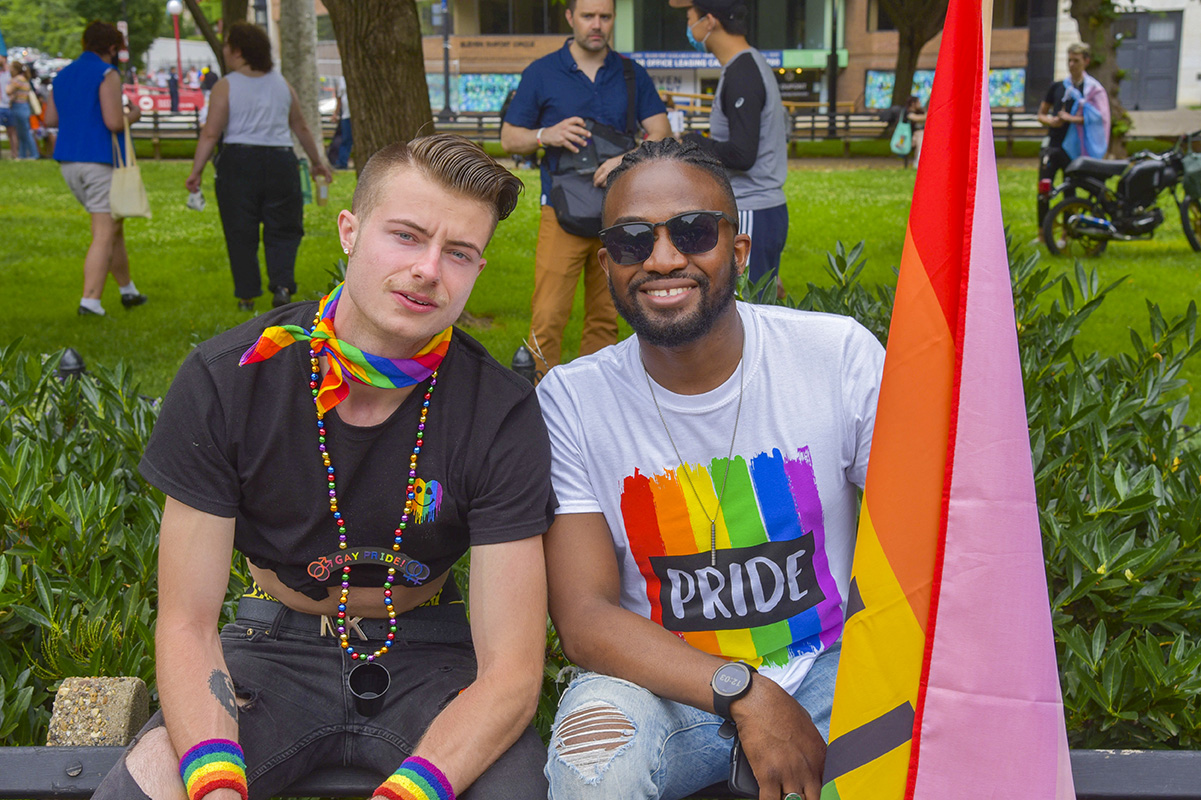 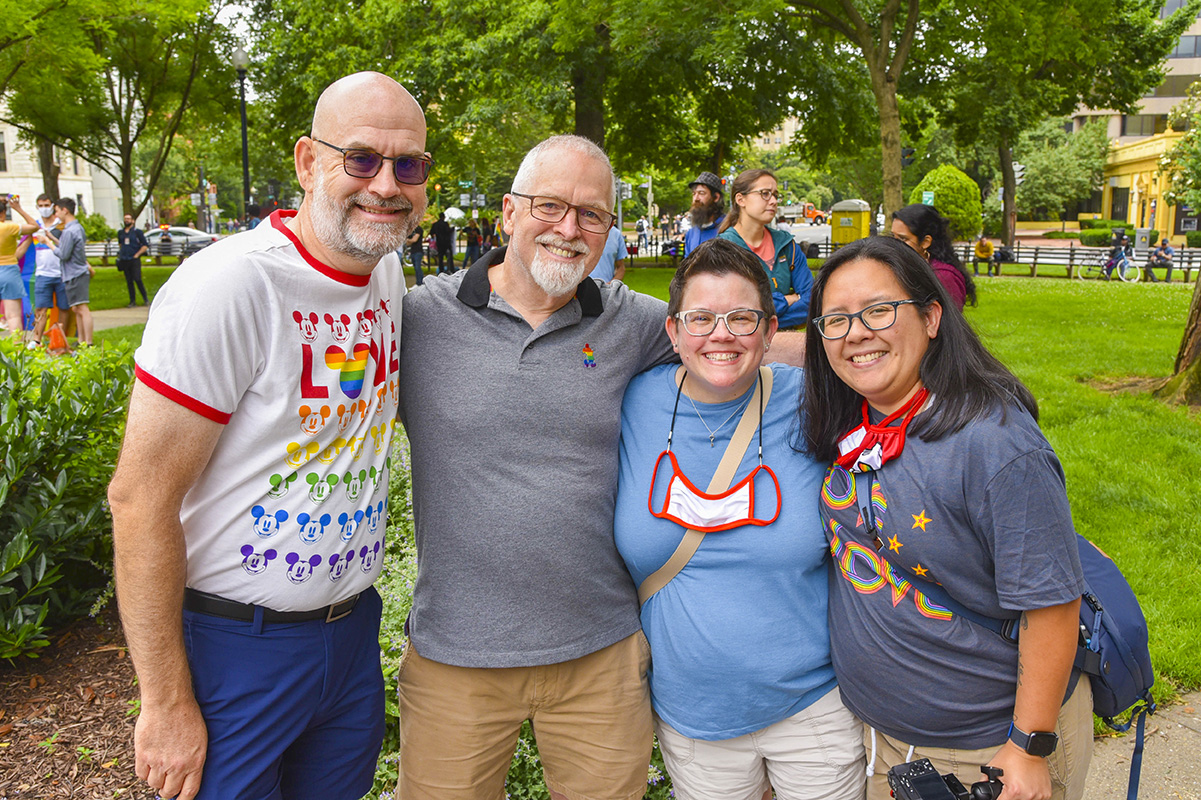 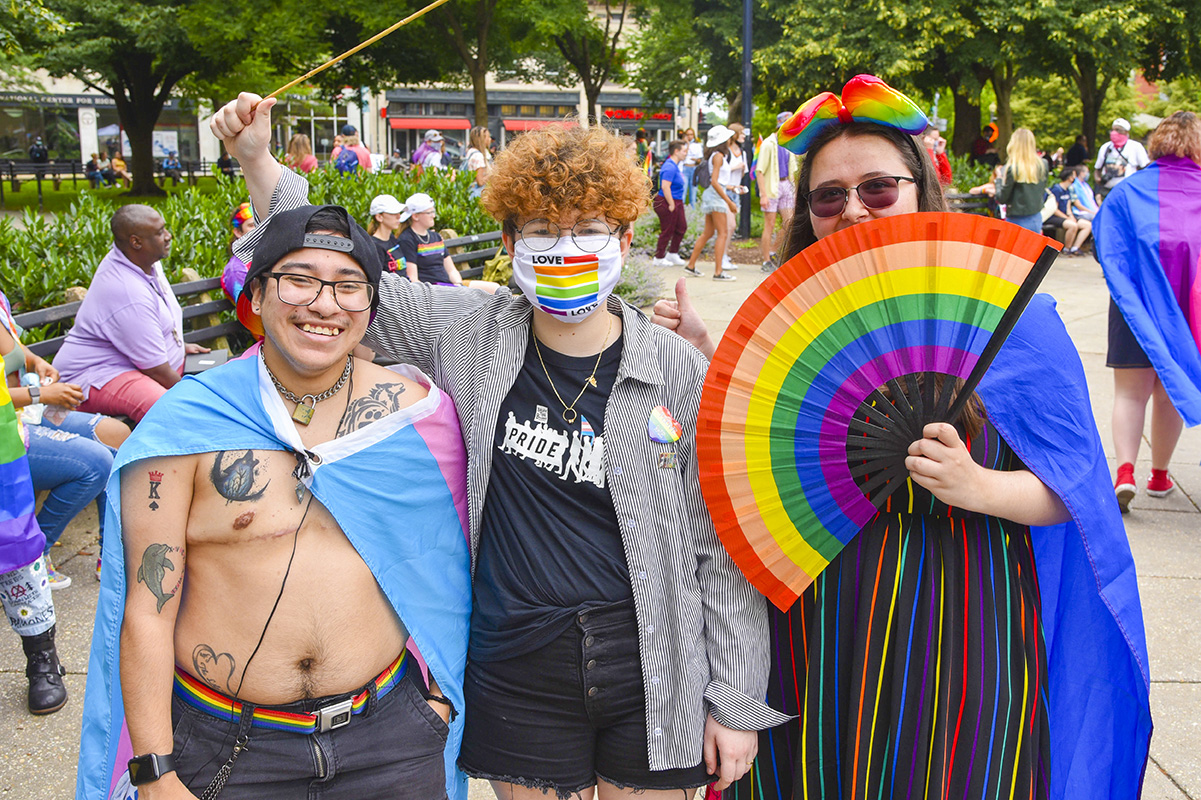 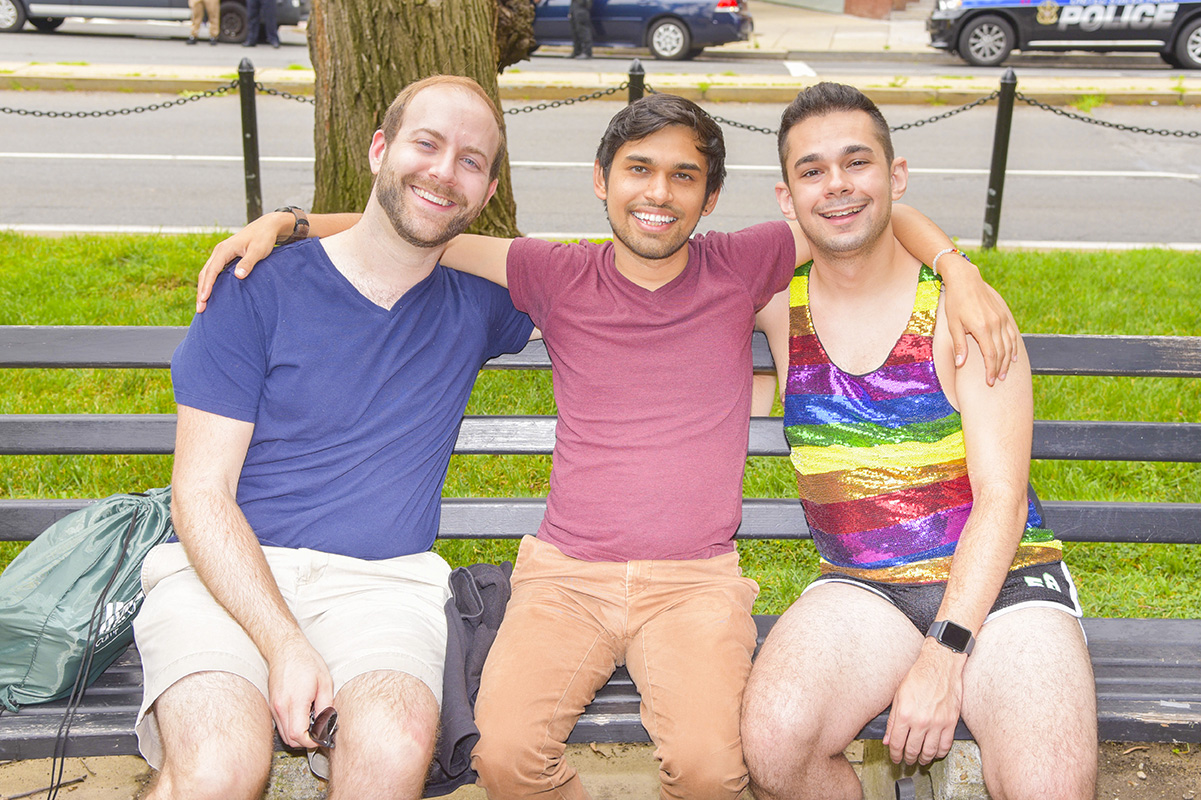 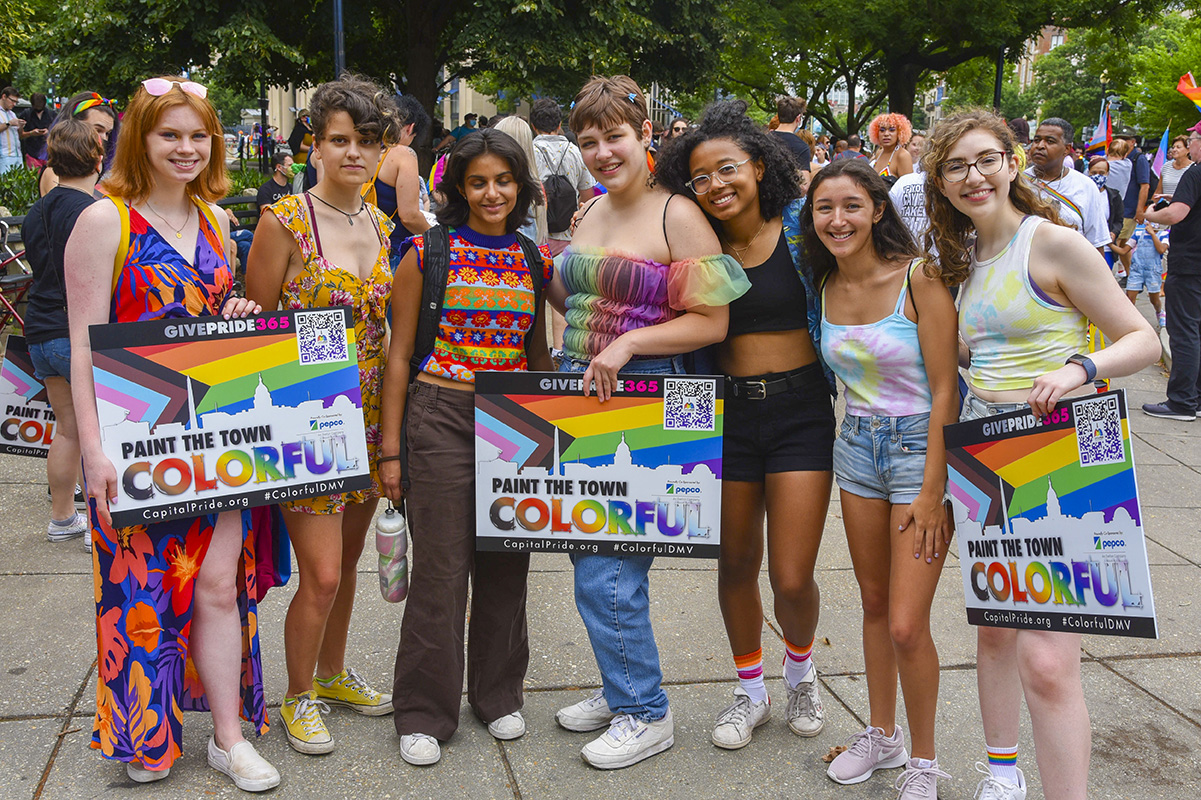 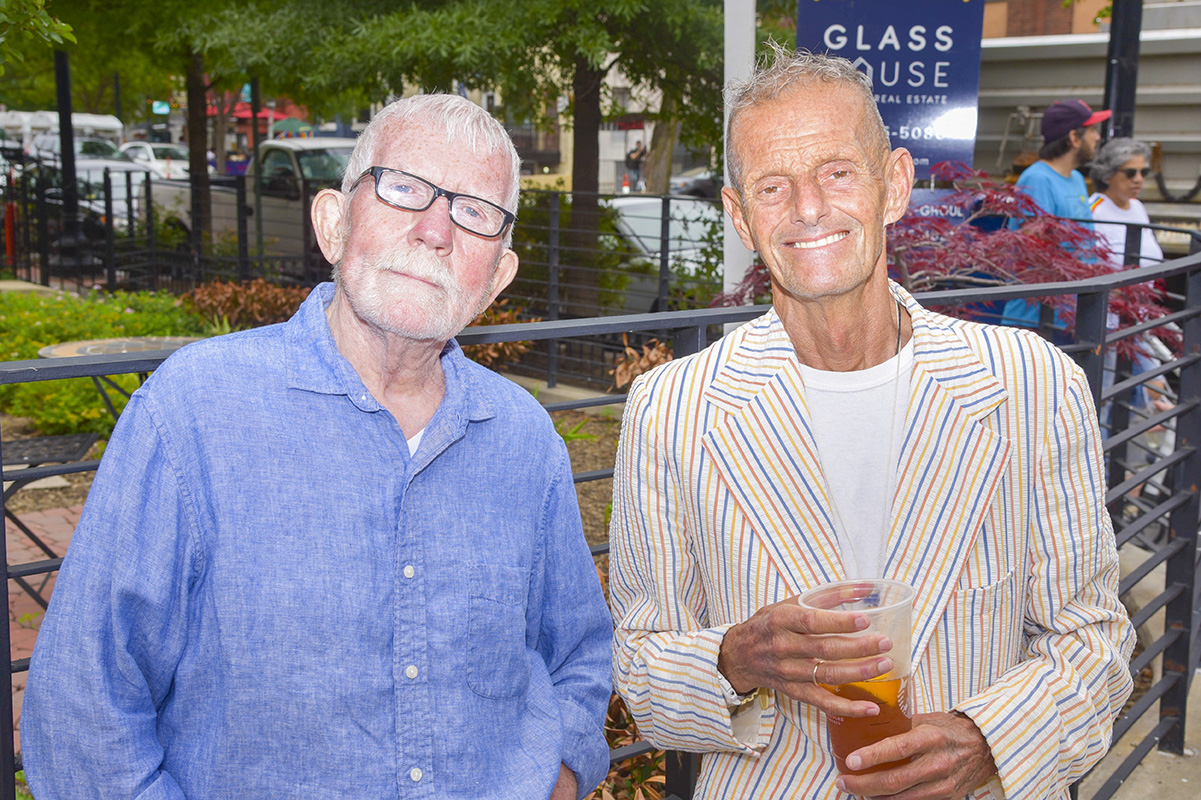 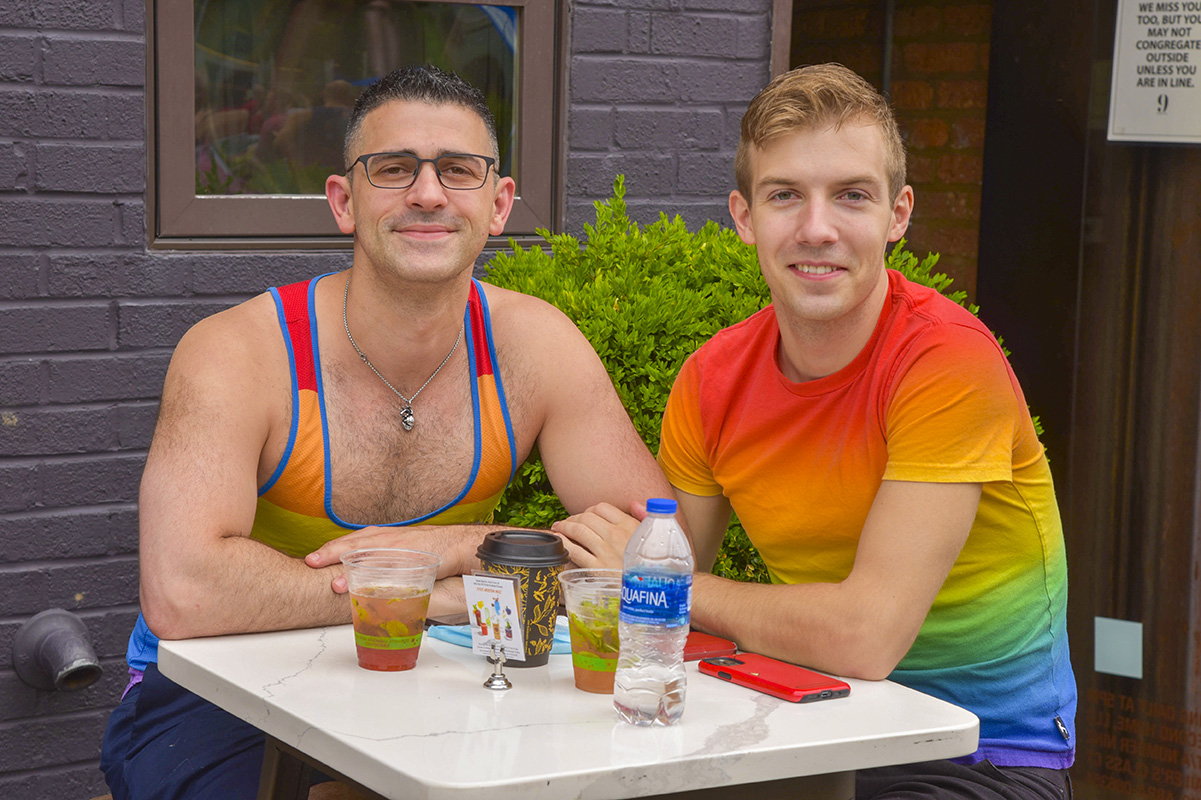 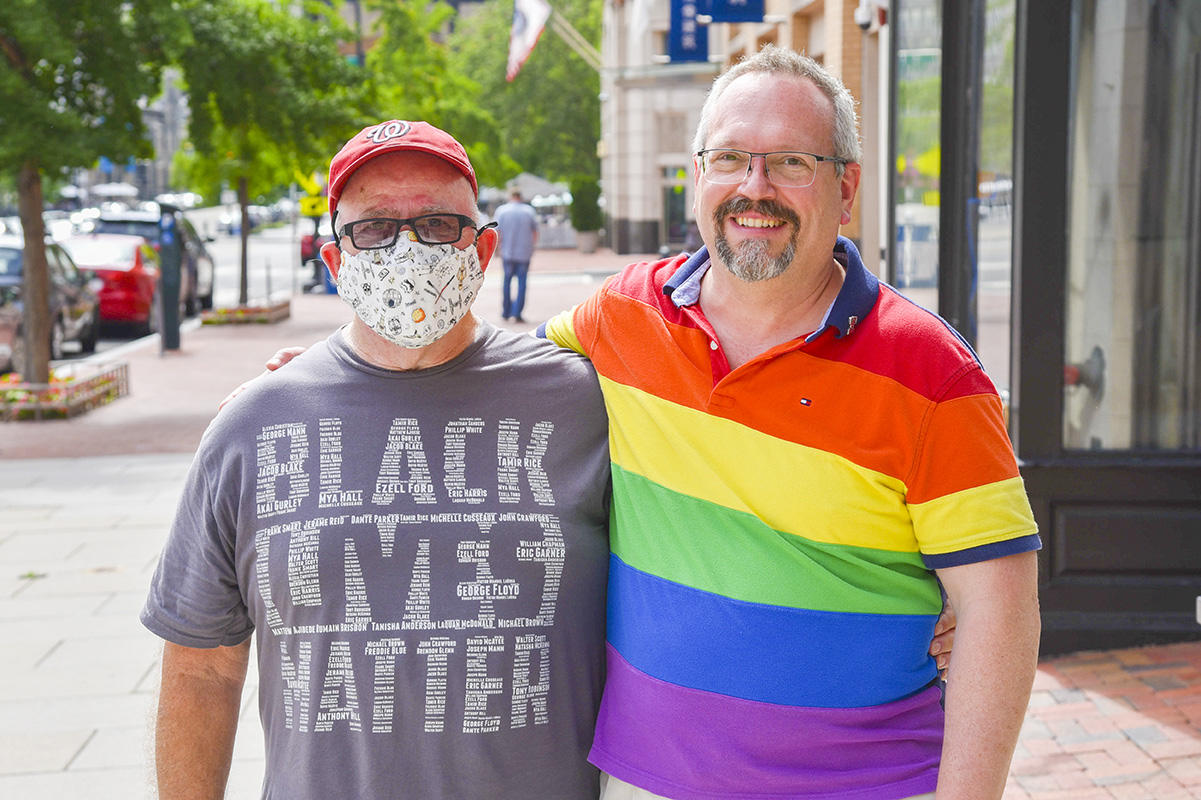 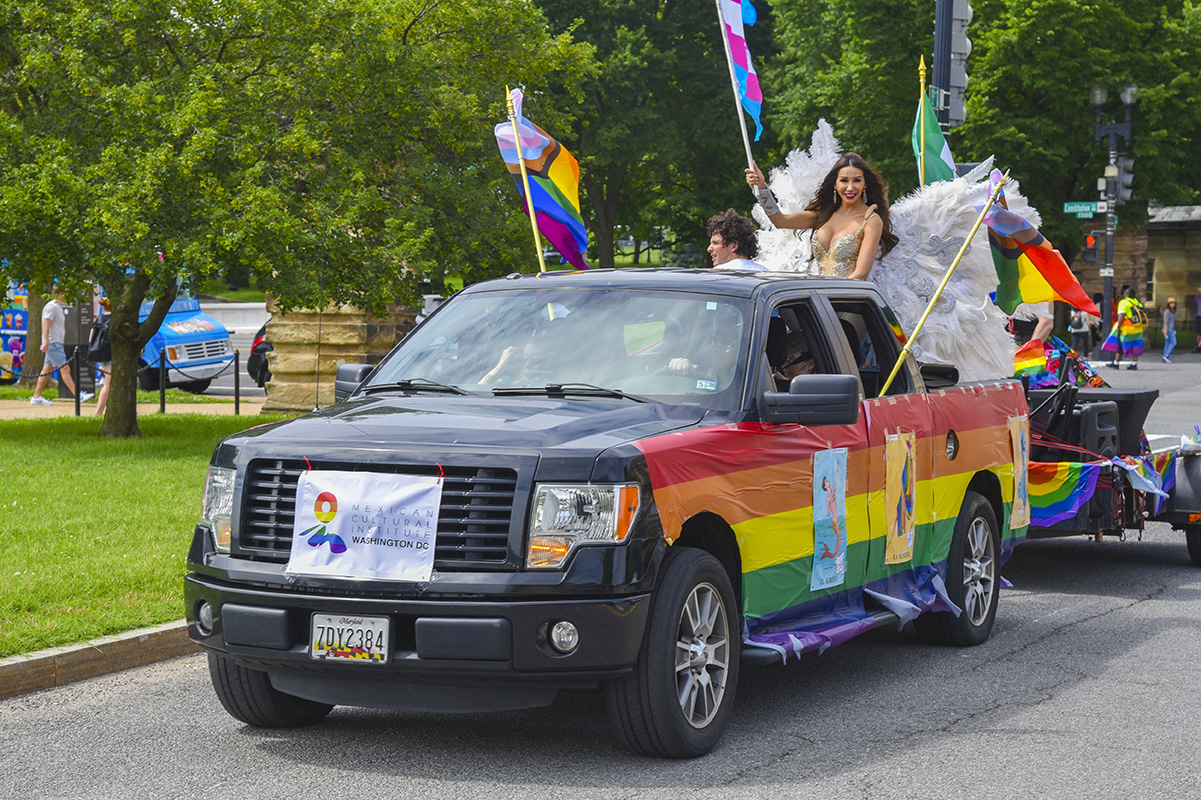 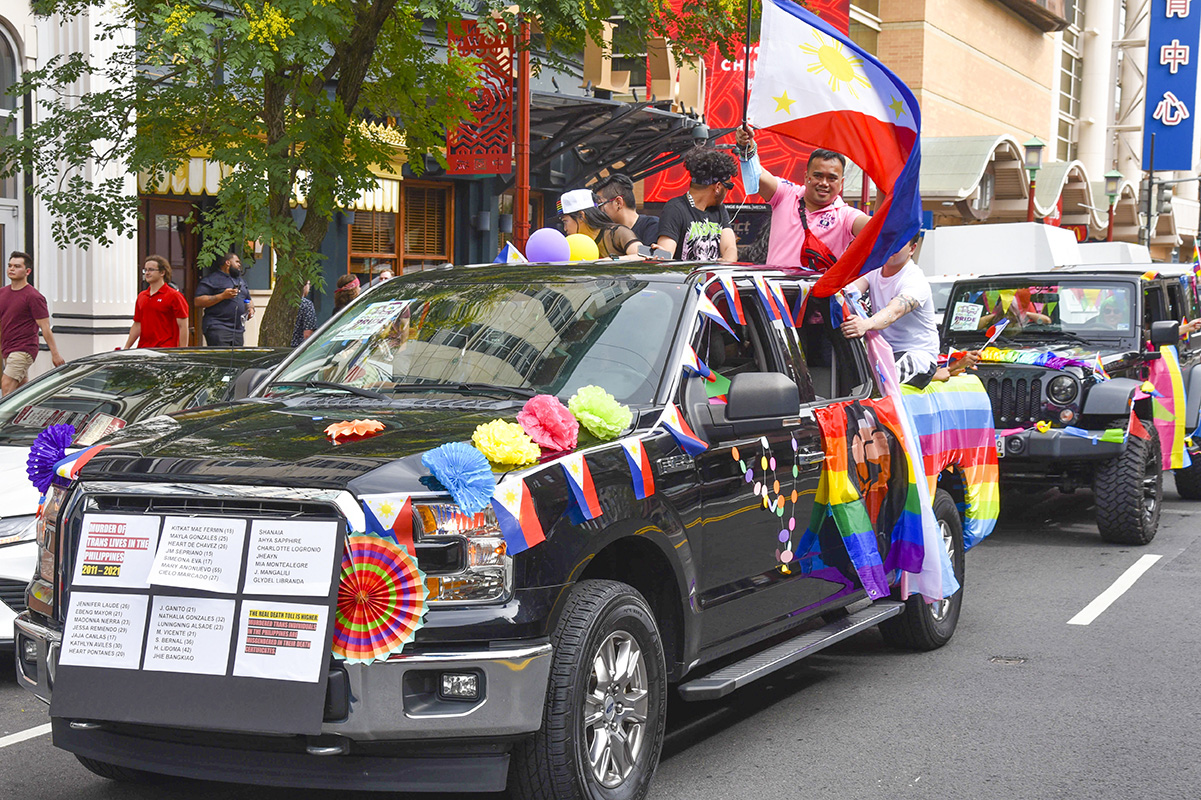 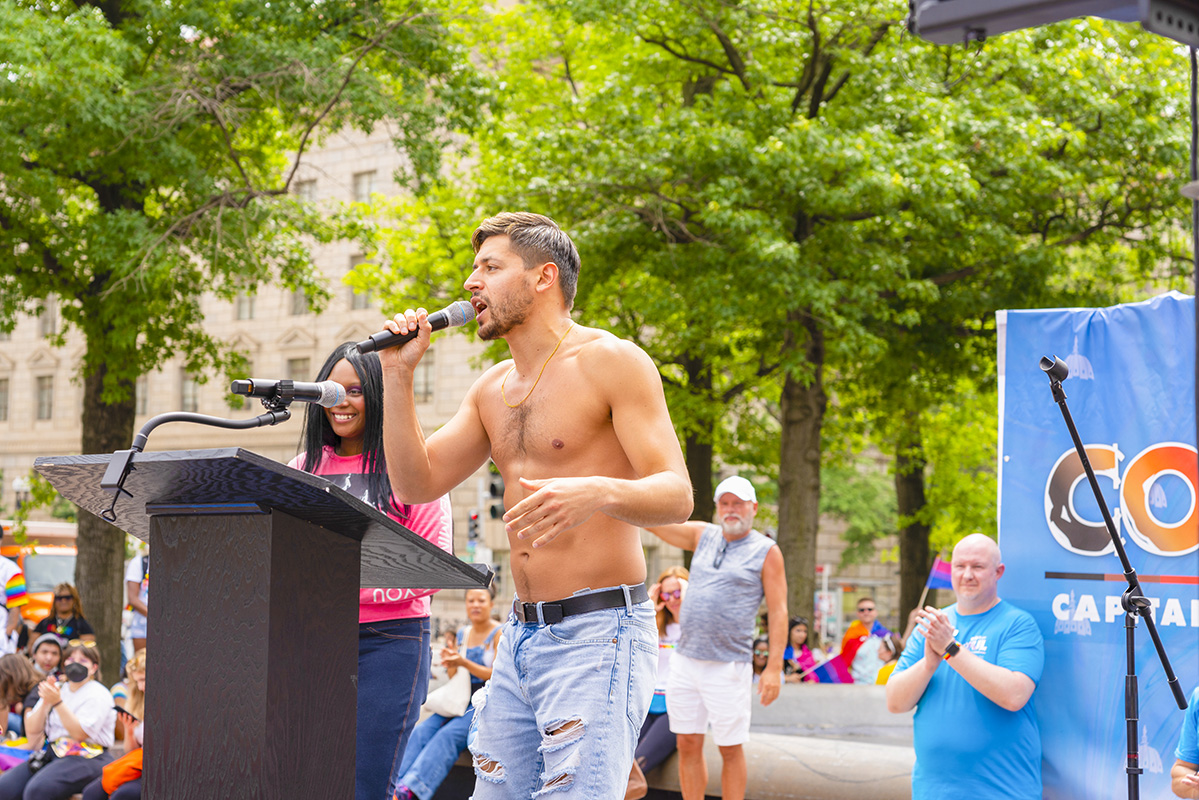 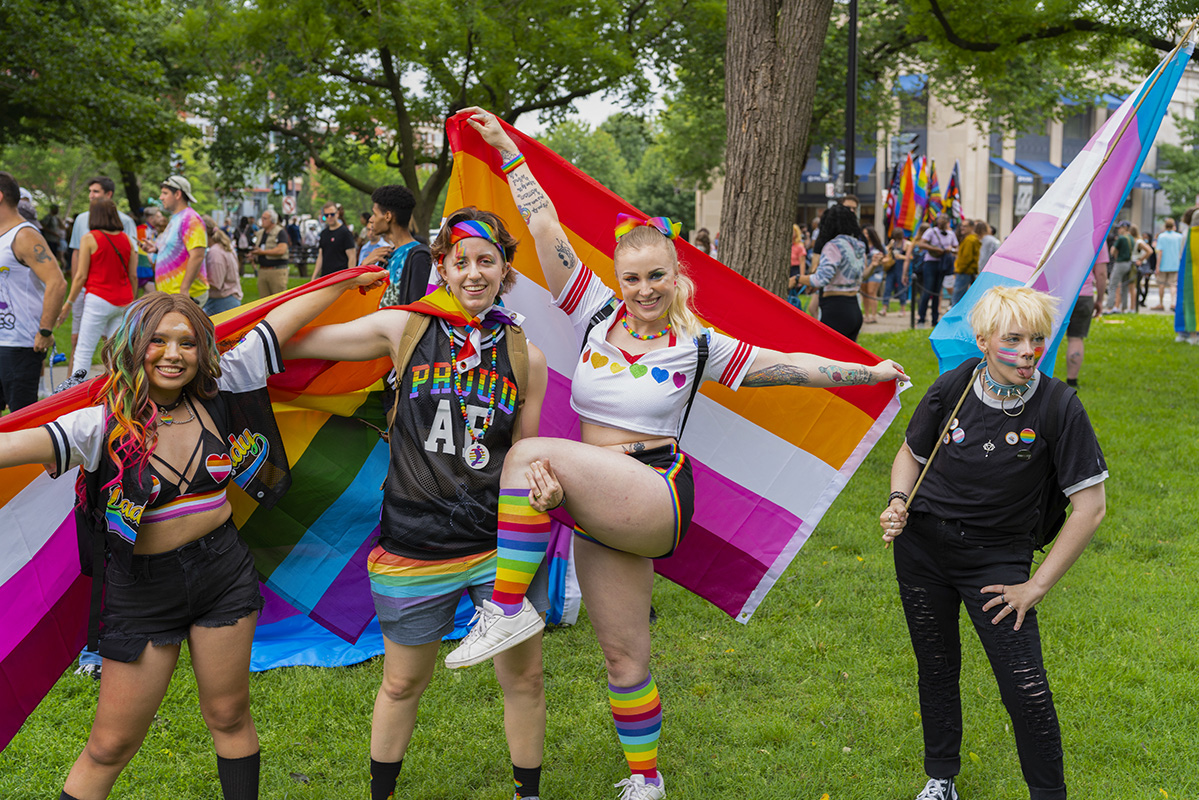 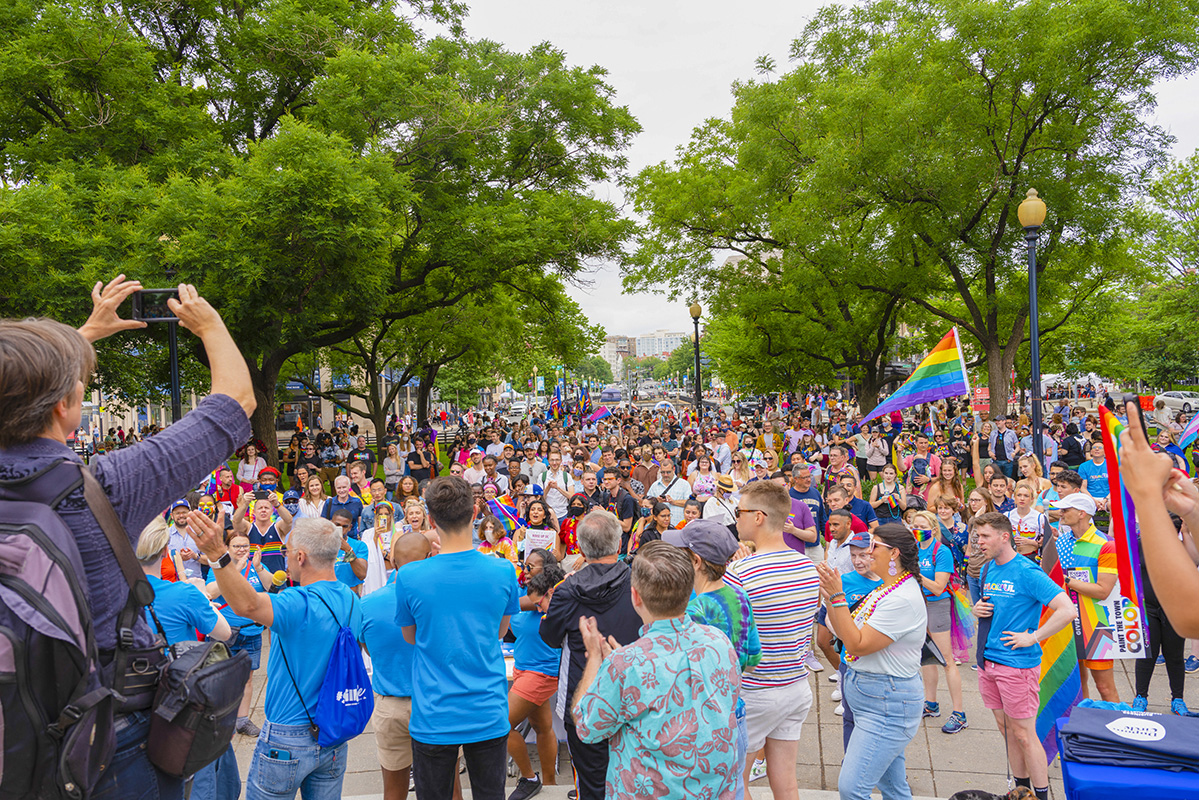 Follow B G Thomas – writer on WordPress.com
Join 188 other followers